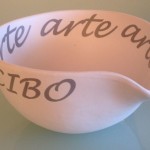 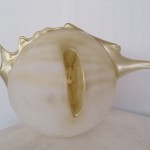 To plastics and fire…

The Plastic subject for the artist is the true great passion. Inside an exclusive selection of Artists that they work with the Plastic materials, topylabrys, that from more than twenty years devotes her with rigor to the expressive search of the Polymers, She was presented with a historical installation: Treliti – 3.000 Stones performed in the years 90 near the Laboratories Montedison. – Material Recycled. Curiosity is the protagonist of the search that allows the discovery of the use and the soul of the Subject. topylabrys makes her fascinate from the manifold forms and deformations that the material – Plastics, assumes: heated, burnt, punctured inflated besides “the signs” that they are read on the surface of the subject they are gotten through Combustion. Her pen, her brushes are the flame of a bunsen that draws near and it estranges from the material giving brown intensity, black etc.. The colours of the surface of the works are the same colour of the subject that comes “through the heat and the scorches. topylabrys in the choice of a technological material as the Plastics, shows as the communication of a subject can be changed been born for the industry and to make to become it a soft expression, rich and protagonist since passed by the hands of the man / researcher / scientist / artisan topylabrys has the ability to push over the confinements of the subjects its executive formulas, the white sheets that welcome the traces of her gestures, that are the result of the control of the subjects that doesn’t allow errors or cancellations, just as the handwriting exercises of the painting and the writing of the Asia. The job of topylabrys conjugates to a first level, the technology of a material like the polistirolo with the primitive citizenship of the fire. The peculiarity of her pictorial and sculptural job to the same time is born from a tradition that along the second halves the century has for principal peculiarity the dramatic plastic shape of Burri and the symbolic cardboards of fire of Yves Klein. And along this expressive thread that wants to renew the places of the conciliation the work of topylabrys. topylabrys is grown as Artist, experimenting near the firm Mazzucchelli of Castiglione Olona where she meets the charm of the Rodhoid. In the years 80/90 it is guest of the laboratory Montedison to Stamped where it expresses her own creativeness through the use of the recycle material creating the “Treliti” three thousand stone. Numerous the shows in Italy and to the foreign countries.